Time: past, present, and future

This is part of a post that I have been asked to write for the homophilosophicus blog. I have decided that rather than write the whole article at once and post it on both blogs, I will write it in stages here. One reason for this is that I find it easier to write smaller direct posts, and I imagine that many readers will also find this easier to read. The second reason is that I can add details here that would probably be too much for a general audience. Thirdly, I can get feedback as I write. This topic fell naturally into different sections, giving me the idea. The sections in this coloured text are  extras for this blog only! 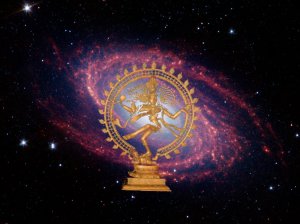 Hinduism teaches that  the past is infinite, as is the future. Though there was a creation of the universe and there will be an ultimate destruction, these mark one of many cycles. Many Hindus also believe that there are other parallel physical universes, though Hindu texts are largely agnostic on this. The duration of each cycle is measured in billions of years. The late Carl Sagan, an agnostic astronomer and astrophysicist commented:

But the main reason that we oriented this episode of COSMOS towards India is because of that wonderful aspect of Hindu cosmology which first of all gives a time-scale for the Earth and the universe — a time-scale which is consonant with that of modern scientific cosmology. We know that the Earth is about 4.6 billion years old, and the cosmos, or at least its present incarnation, is something like 10 or 20 billion years old. The Hindu tradition has a day and night of Brahma in this range, somewhere in the region of 8.4 billion years.

As far as I know. It is the only ancient religious tradition on the Earth which talks about the right time-scale. We want to get across the concept of the right time-scale, and to show that it is not unnatural. In the West, people have the sense that what is natural is for the universe to be a few thousand years old, and that billions is indwelling, and no one can understand it. The Hindu concept is very clear. Here is a great world culture which has always talked about billions of years. END_OF_DOCUMENT_TOKEN_TO_BE_REPLACED

Return of “The Shatkona” blog by another Western Hindu

I am very pleased to tell you about the return of “The Shatkona“, a blog from a fellow follower of the Kailasa Parampara of the Nandinatha Sampradaya. The blog was previously deleted by the author, and therefore removed from my list of blogs by Westerners following Hinduism. It is now back with a number of interesting articles.

The author had stopped blogging due to the illness and death of a close relative, which he writes about on the blog. I am happy that he is now able to move on and continue his blog. 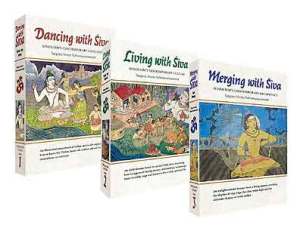 Nearly a year ago I wrote about my initial impressions of the Master Course. I am now completing the last few weeks of the “stage one Master Course“. I have looked at the final worksheet and it contains an application for the second year “stage two Master Course”, which I fully intend to follow.

The course so far has greatly increased my knowledge of Hinduism in general and of the Shaivite Shiva Siddhanta Church in particular. The daily lessons from the three books have helped add a spiritual dimension to my life. Each day a reading from “Dancing With Shiva” gives a clear teaching of Hinduism with a detailed explanation. The lesson from “Living With Shiva” describes the Hindu way of life, and how to fit the lessons into your daily living. Finally, “Merging With Shiva” describes Saivite Hindu philosophy. The lessons from the last book can be esoteric, and I am sure that there is far more to them than I have understood in the “stage one” course. In a way it is a nice reminder that I still have much to understand.

END_OF_DOCUMENT_TOKEN_TO_BE_REPLACED

I live near to a Hindu temple, and I decided to visit. At first I was very nervous about just turning up, but I was made very welcome and the Pandit explained many things to me. I also bought and studied many books on Hinduism, as I knew that I had been called to this path. One of the books I bought was “How to become a Hindu”, which is published by the Himalayan Academy and available online. END_OF_DOCUMENT_TOKEN_TO_BE_REPLACED