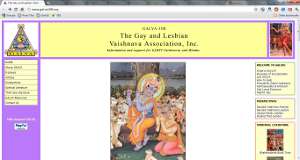 A site for gay and lesbian Hindus

“.. But at least some youngsters move to hindu , coz they arent acceptd in Christianity coz they are Gay/bi etc.

Hindu spirituality has nothng to do with it. But Being a hindu or hindutva ,the way of life of a hindu is against such acts as christianity is.

‘Vivekabhudi’ or power to differentiate right-wrong is what which makes human different from animals. And hinduism is for those who have this viveka. So people who dnt even have the diligence of animals are not suited for hinduism.

Such people who misuse of Unorganised structure of hinduism really make us hindus ashamed.

But I have seen a trend that when people bi/gay nt get acceptd by Catholicism they turn hindu. This is not a place for going when you have no way. Secondly hinduism is clearly in line with nature that female-male equation.

I was going to write a response to the comment, but I realised that the response would be fairly long, and I had a feeling that I should write it as a post. Part of me did not want to write on this controversial subject, some readers are bound to disagree me. I have a feeling that it is not a subject that I should just leave alone though.

First of all, I will discuss the areas where I agree wholeheartedly with the commenter. END_OF_DOCUMENT_TOKEN_TO_BE_REPLACED