Devas in the V&A

Nandi at the V&A

I previously wrote about the deities in the British museum. Since then I have been to the Victoria and Albert Museum, and they too have a collection of murtis. The fine Nandi to the left dates from the late 16th or early 17th century. He takes centre place in the gallery, but is placed so that he looks sideways, past a fine Shiva Nataraja.

Here is the large Nataraja. This 12th century bronze murti is from Tamil Nadu. The inscription says that it is “Reportedly found in Tinnevelly District, South India” [emphasis mine]. I wrote about the symbolism of the Nataraja in my post Lord Shiva many forms.

This earlier Nararaja is from the 8th to 9th century (late Pallava or early Chola period. Again it is from Tamil Nadu, this time from the Tanjavur District. It is made from copper alloy.

This Ganesha Murti is from Tamil Nadu, made out of copper alloy in the Chola period.

This scene of Shiva and Parvati would originally had an additional figure of Skanda in the middle. Again it is from Tamil Nadu in the Chola period.

This is the Vedic sun God Surya, from Bihar. It dates from the 12th century and is carved from black basalt. The description says: “Surya, the Sun God, is represented riding his chariot drawn by seven horses, to be seen issuing from the base mouldings. At his feet stands his consort Prabha, and beneath her Surya’s charioteer”. 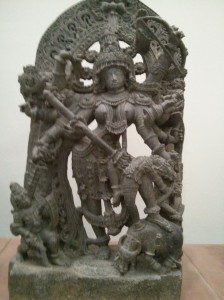 Here is Durga Mahisasuramardini, slayer of the demon Mahisasura. This limestone carving is in the Hoysala style and dates from 1240-1260. It is from the Hassan district, southern Karnataka, in India.

This black shale Vishnu dates from 1100-1200 and originates from the Bengal area, the region now in East India and Bangladesh.

Though it is nice to be able to see these deities it somehow feels wrong that they are in a secular museum rather than in a place of devotion. I also suspect that some of them were not obtained entirely honestly. In the days of the British Raj it was thought fine to offer a priest some money for a valuable item in India, when at the same time this would certainly not have been allowed in Westminster Abbey!

This entry was posted in religion. Bookmark the permalink.