Not all Western Hindus are white Hindus

… and not all Hindus from non-Hindu cultures are Western Hindus 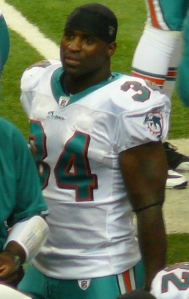 Ricky Williams, running back for the Baltimore Ravens and Western Hindu

On average three or four times a week someone follows a link in my article “Some famous Western Hindus” to the Wikipedia entry for Ricky Williams. Ricky is an  an American football running back, playing for the Baltimore Ravens. Though three or four clicks does not sound like much, it is higher than the clicks on most other minor links in old articles.  I can’t help wondering how many of those clicks are from other non-white Western Hindus, or non-white Westerners looking into the rich heritage of Hinduism and wondering if it is open to them.

Ricky Williams is far from the only non-white Western Hindu. A while ago I received an email from the author of “The Accidental Hindu” blog. She is a black Western Hindu from the West Indies, and I can highly recommend her blog. Another Western Hindu blog, the Yatra is run by a Latino Hindu in the USA.

I imagine that non-white Westerners embracing Hinduism have the same worries about being accepted that any non-Desi has when first visiting a temple. On top of that must be the insecurity that comes from not always being accepted by everyone in the majority population.  I hope that everyone who does embrace Hinduism has the same warm welcome that I did. They certainly should do because the concept of Vasudhaiva Kutumbakam, or “the world is one family”.  God is in everyone, all contain the spark of God’s soul.

There is an apocryphal story that I heard somewhere :

A college was holding a course about diversity, respect, and stereotypes. The tutor posed this question to a class, to try and make them think about their underlying assumptions about race and gender “can you conceive  of God as a young black woman?”.

A Christian student said that it was very difficult, he naturally thought of God as a father figure. A Jew and a Muslim thought the same. Even a blak atheist said that though he didn’t believe in God, the image that came to mind was an old white man in the sky.

Though its just supposed to be a funny story, I think that it does underlie the Hindu appreciation of the universality of the divine.

Not all Hindus from non-Hindu cultures are Western Hindus

There are also Hindus who are not from traditional Hindu societies outside the West. In  Accra, in Ghana there is an unusual Hindu temple. Established in 1975 by Swami Ghanananda Swaraswati, almost all the attendees are of Native Ghanan descent. From a BBC article, the temple Manager says:

We don’t ask anyone to convert to Hinduism. Those who seek the truth enquire about the Hindu monastery. We write articles in newspapers before we observe big Hindu festivals like Navaratri or Dipawali.

I have previously found an article on a Chinese convert to Hinduism, though I can not find it at present. The person in question translated Sanskrit texts to Chinese.  I will update the article if I find it. There is a you-tube video of Chinese converts chanting mantras though.

In summary, there are many converts to Hinduism that are not white Hindus. Hinduism believes that all the world is a family and welcomes all. If you are a convert to Hinduism, whatever your nationality and colour. I am sure you will be welcomed. Why not blog about it to show the path to others.

Picture of Ricky Williams is from Wikipedia and is in the public domain. The picture of  Swami Ghanananda Swaraswati is a low resolution rendition from the BBC site, and considered fair use.

54 responses to “Not all Western Hindus are white Hindus”