Another blog by a Western Hindu – The Accidental Hindu 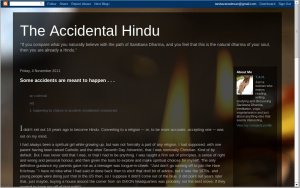 A while ago I had a message from someone saying “not all Western Hindus are white Hindus”. I was going to write something about this (and I still might) but in the meantime the sender of that message has started her own blog, “The Accidental Hindu“.

She was born in the West Indies, and describes herself as a black Hindu. She writes under the name T.A.H, and describes her spiritual path from a Catholic and Seven Day Adventist  upbringing to Hinduism. Like me she has visited other faiths on the way! She mentions feeling at home with vedanta philosophy, so I think that her blog probably belongs in the smarta section, but I will leave it in the “Blogs Yet to be Classified” section until I have read more. She has a very clear and readable writing style, making her story easy to read.  I have added the blog to my page of blogs by Westerners Following Hinduism.