The Bhagavad Gita: is it the “New Testament” of Hinduism? 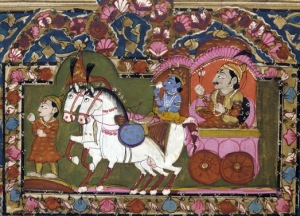 I heard the Bhagavad Gita described as the “New Testament of Hinduism” on the radio. I have now seen that this description is quite common. Of course all analogies break down at some point, and there are a number of ways in which this is inaccurate.

Since this analogy could really give totally the wrong impression of the Gita to a Westerner who did not know Hinduism, I will write about some of the main differences.

The Gita does not bring a “new covenant”

Christians believe that the New Testament represents the end of an old covenant between God and the Jewish people and the beginning of a new covenant with the followers of Jesus. The “covenant” is seen as an agreement that shapes the relationship between God and Humanity.

Even the Hindus who rate the Bhagavad Gita as the highest scripture say that the same knowledge is in the Vedas. They often see the Gita as an interpretation of the Vedas for the Kali Yuga, simpler and more direct for a this era, when people are further from God and the Devas.

Not all Hindus see the Gita as a holy book

The Gita is not part of the scriptural canon of many Hindu lineages. Saivites (devotees of Shiva) and Shaktas generally see the gita as an epic. They respect it as the holy book of many Vishnavas (devotees of Vishnu), but don’t see it as scriptural themselves. Vishnavas acknowledge that some Hindus don’t see the Gita as scripture, but still count them as Hindus. Even among Vishnavas there are some who would rate the Gita as secondary to the Ramayana or other books.

Hindus can criticise the Gita and still be Hindus

Some great swamis have called the Bhagavad Gita the kolai nul or “book of carnage”. They may appreciate the clear messages on dharma, samskara, and bhakti, but think that it could also be interpreted as a call to violence. Though followers of the Gita would probably disagree with this assessment and argue strongly against it they would not see it as a “non-Hindu” viewpoint.

This again is different to the Christian view of the New Testament. Anyone who argued that the New Testament was bad or negative would not be seen as a Christian. It is universally accepted as the essence of Christianity.

One commenter has pointed out that I am a little ambiguous here, because it is possible for Christians to criticise parts of the New Testament, for example some Christians believe in the gospels but don’t take everything in St Paul’s letters to be scriptural. For clarity, its possible for a Hindu to say that the Gita is a negative book over all, whereas a Christian cannot do that with the New testament. In particular any Christian who rejected the story of the gospels would not be considered Christian.

So, unlike the New testament the Bhagavad Gita is scripture to some Hindus, and just an epic story to others. It does not bring a change in the covenant or relationship between humanity and God, though some Hindus believe that it provides a clearer interpretation for this era. Finally it is perfectly possible to Criticise the Gita, even see it as a problem, and still be a Hindu.

Image from Wikipedia and is free to use as the copyright has expired.

This entry was posted in hinduism, religion and tagged bhagavad gita, gita. Bookmark the permalink.

45 responses to “The Bhagavad Gita: is it the “New Testament” of Hinduism?”