The Shatkona blog is back! 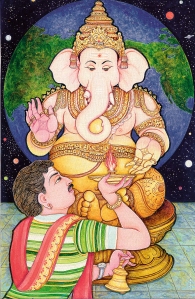 The Shatkona blog is back in the list of blogs by Western Hindus. I had previously removed the blog when the blogger announced that he was returning to Catholicism, Those of you who have been following his blog will know that he has come to realise that this was attached to both Catholicism and Hinduism, and later discovered that his attachment to Catholicism is more nostalgia than true spiritual feeling.

I have been wondering whether to add his blog back for a while. A few days ago I emailed the author and said that I would leave it up to him, when and if he felt ready I would add it back to the list. Today I received a simple email saying “Please re-add my blog, my path is Sanatana Dharma”. I feel that its very auspicious that he made this decision on Ganesha Chaturthi.

The image of Ganesha is from the collection of images from “What is Hinduism” released rights-free by the Himalayan Academy.

This entry was posted in hinduism, other religions, religion and tagged blog, catholicism, christianity, roman catholic. Bookmark the permalink.

11 responses to “The Shatkona blog is back!”