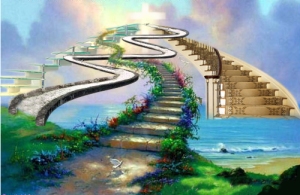 Many paths to one destination

In the previous post I answered the main points in a comment by littleindian, about freedom to chose and following a guru. This post  addresses the two questions at the end of the comment. Answering these questions has proved to be quite difficult, each question has subtle meanings which have made me think very hard about the nature of Hinduism, religions, conversion, and culture. The first question intrigued me because of the wording:

Why did you choose to learn to live like a Hindu?

Usually people just ask “why did you chose to become a Hindu?”, which I answered in my three “How I became a Hindu” posts. Littleindian’s question is subtly different, showing an understanding of Hinduism as a way of life as well as a belief. So to what does it mean to live like a Hindu? To what extent do I live like a Hindu?

When someone talks about Hindu culture or living like a Hindu they can mean two different things. Firstly they can mean the culture and way of life of the majority of Hindus. A lot of this  Indian culture is shared by a lot of non-Hindu Indians. A trivial example is that most male Indians have a great love of cricket, which they follow avidly. Other examples are Indian secular art-forms, Indian cinema, etc. These cultural elements are popularly referred to as “Desi culture” by many emigrants from the Indian subcontinent.  I make no attempt to “live like a Hindu” in this way. There are some things I like (Indian food, music, and artwork) and some things I have no interest in – I am less interested in cricket than even the average English person for example.

The second meaning of “living like a Hindu” involves ways of living that follow directly from the teachings of Hinduism. Examples of this are going the temple, performing daily puja, and chanting japa. There are also more subtle things which follow from Hindu beliefs, like living a truthful life, seeing God in everyone, and feeling spiritual purpose behind all. This is a necessary part of the Hindu religion. Following the Hindu way of life in this sense naturally follows from Hindu. beliefs. I chose to live dharma in this way because it is a way of living the teachings. The attitudes and observances naturally follow the beliefs. I am far from a perfect follower dharma, but my faith, Sanattana Dharma makes me want to follow it better.

The day you decide Hinduism is not for you, what will you be when you give it all up?

First of all I have a very strong feeling that I have found my spiritual home. I am very unlikely to stop following the Nandinatha Sampradaya and even less likely to decide that Hinduism is not for me. I cannot imagine that I would ever follow one of the dogmatic religions, each of which says “we are right, we are the only ones God will save”. I think it unlikely that I would follow one  of the ultra liberal religions without any creed. I have already seen how this leads to a “polite indifference” to belief. I have seen these paths before, as I describe in my three “How I became a Hindu” posts. However, even though I think I have found my spiritual home, this does make an in interesting hypothetical question.

One thing that thinking about this question has shown me is a distinction between born Hindus and coverts to Hinduism. A born Hindu who ceases to practise Hinduism or is agnostic is generally thought to still be a Hindu. A Born Hindu is a Hindu as long as they don’t explicitly convert to another religion. I don’t think that converts to Hinduism would be thought of as non-practicing Hindus in the same way. They are more likely to be seen as never really becoming a Hindu or as a dabbler.

So what would a convert to Hinduism be if they no longer followed Hinduism? Obviously if they adopted another path then this is what they would be. If they didn’t then I think they would be seen as seekers.

Some paths are not straight

I suppose really labels are not important – Anyone who did leave Hinduism, whether a convert or not would still be themselves. They would still be a soul on the path to God. It may not be the straightest path, but I believe that we will all reach God in the end.

Anyone who left Hinduism would certainly bring things they learned  with them. Hinduism accepts a wide range of beliefs, some seeing Shiva as the supreme God, some Vishnu, there are many more ways of seeing God within Hinduism. I can’t believe that anyone who has experienced the community of people worshiping God in different ways coming together with mutual respect, all fully passionate about their belief would not feel that this is important whatever path they follow.

The fact that there are so many  paths within Hinduism is one reason why it is inconceivable to me that I would ever need to look outside. Even so I found considering these questions very insightful. Perhaps unless we contemplate even the possibility of leaving a path and what it would mean, we cannot fully appreciate and understand why we are on it.

Picture “Many Paths to one Destination” from photobucket, which included invitation to copy and share. Picture of Kumble from Wikimedia, available under creative commons license. Picture of road sign from re-ality, licensed under the Creative Commons attribution license.

This entry was posted in hinduism, other religions, religion and tagged conversion, indian culture. Bookmark the permalink.