The Pope’s Visit to the UK 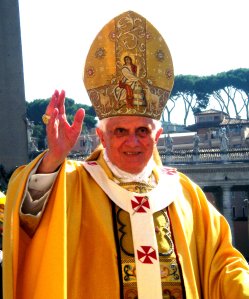 I have mixed feelings about the Pope’s visit to the UK, which ended last Saturday. His visit can be seen in two very different ways; as a visit of a holy man to his devotees or as a visit to the UK of the head of an evangelical outreach organisation.

Seeing the pope as a  man visiting his followers, I can be pleased for them having the spiritual  experience. I know that this can be a great spiritual experience and a coming together of a spiritual community. I know from my meeting with Satguru Bodhinata Veylanswami what the visit of a spiritual leader can mean for devotees. I hope that this visit will help Catholic Christians on their spiritual task. A wise man at our local Mandir told me that the time of the Pope’s visit was not the time to bring up differences, out of respect for Catholics seeing this as a spiritual visit.

Things can be looked at in different ways

That said, looking at the Pope’s visit from the point of view of non Catholics there are reasons for concern. Of course there is the child abuse scandal.  There are some questions about how much the pope knew about these events, and whether he played a leading role in  the cover up. I am not going to say much about this. If his involvement was to a criminal level, then it is a matter for the authorities. If it is not then it is really a concern for Catholics as to whether he is a fit spiritual leader.  I am more concerned about the call for evangelism, and his lack of respect for other faiths. He has done a lot to reverse the greater tolerance of other faiths brought in Vatican 2. He describes even other Christian denominations as either defective or not true Christians.

He totally dismisses the idea that people of different religions and cultures should be left to worship God in their own way. He says:

Here too the objection could be made as to whether it is still legitimate to ‘evangelize’ today? Should not all the religions and philosophies of the world coexist peacefully and together seek what is best for humanity, each in its own way?”

In answer to this objection, Benedict XVI mentioned the letter sent to him by 138 Muslim religious leaders in October. In his reply, the Pontiff explained how two different faiths should co-exist: “I expressed my convinced adherence to such noble sentiments, at the same time underlining the urgent need for a harmonious commitment in order to safeguard values, mutual respect, dialogue and collaboration.
…
People should not be afraid to evangelize, the Pope said, because it marshals the forces of good against violence and injustice. Indeed, “through the encounter with Jesus Christ and His saints, ‘humankind’ is re-equipped with those forces for good without which none of our plans for social order is realized but, faced with the enormous pressure of other interests contrary to peace and justice, remain as abstract theories.

Basically he is saying that only Christians, and only Catholic Christians are capable of living in peace and harmony.  History shows the opposite, that exclusive religions such as Christianity and Islam are often at the heart of conflict. This conflict is often a conflict with other religions, but the exclusive nature means that conflicts often arise between groups within their own faiths, each seeing the other as not being “true believers”. Of course not apply every follower of an exclusive faith acts this way, or even a majority of followers, but it is something that comes about within these faiths as a consequence in their belief that they have the exclusive truth.

The pope’s beliefs are obviously totally at odds with our beliefs as Hindus. Whereas he believes that only Catholic Christians are capable of living in peace and are on a true path,  we that everyone has a divine spark within them, and all are capable of love, peace, and harmony. Compare the pope’s words to those of Satguru Sivaya Subramuniyaswami:

Differences in religion, arising as they do out of a variety of racial, cultural and individual experience, are to be expected and appreciated. They provide a fortress against philosophical monotony and spiritual stagnation. Though there are many who seek to convert the rest of the world to their own creed, the wise are tolerant of the beliefs of others and refuse to promote universal uniformity in cultural, intellectual or spiritual spheres.

The hope for the future and peace does not lie with the pope’s idea that everyone must be converted to Catholicism, but with the idea held by Hinduism. Sikhims, Buddhism, and many other faiths – that we are all on a spiritual path and we should all respect and love those on other paths.

So, I say this to British Catholics. Enjoy your faith, and I hope that the visit of the Pope has been a fulfilling spiritual experience for you. Allow others to enjoy their own faiths, with respect and understanding our differences can be enriching.

First image of Pope released under the Creative Commons license. The second image has been widely released on the web and covered by “fair use”. Click on images for source locations.

This entry was posted in hinduism, other religions, religion and tagged catholic, christianity, pope, Pope Benedict xvi. Bookmark the permalink.

2 responses to “The Pope’s Visit to the UK”