Nature red in tooth and claw

We recently went to the Farne Islands on a boat trip. I had been before but not during the nesting season. The islands were absolutely covered with nesting birds; Puffins, Terns, Gannets, and more. The terns vigorously defended their nests, swooping and diving at us when we approached. The whole islands were teaming with life. It is very easy to see the gillemots, they stay on their nests even when people approach close up. The terns swoop at people trying to drive them away from their eggs and young. It is easy to see these birds as inspirational examples of parenthood and devotion to the young. For them the people approaching are seen as real risks, standing up to a ‘predator’ is a matter of life and death. 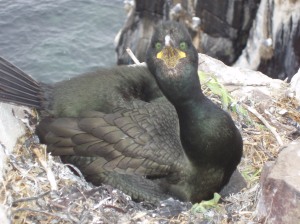 We should not forget that the huge nesting population of these islands is fed by the fish in the surrounding ocean. Some birds will eat other’s eggs and young given half a chance. The beauty of these islands is sustained by “nature red in tooth and claw”, the circle of life. How do we as Hindus reconcile the beauty of nature with the death and suffering necessary to sustain it? Why do Hindus practice ahimsa, non-harm, towards all creatures when nature itself involves violence?

Gannets on the Cliff

As Hindus we believe that this circle of physical sustenance overlays a cycle of reincarnation. The two cycles are interlinked, the death of the fish not only sustains life but is instrumental in the advancement of the atma or souls of the creatures. In this way we can see that it is necessary, all part of Shiva’s dance. The book, Dancing with Shiva says:

There is a divine purpose even in the existence of suffering in the world. Suffering cannot be totally avoided. It is a natural part of human life and the impetus for much spiritual growth for the soul. Knowing this, the wise accept suffering from any source, be it hurricanes, earthquakes, floods, famine, wars, disease or inexplicable tragedies. Just as the intense fire of the furnace purifies gold, so does suffering purify the soul to resplendence. So also does suffering offer us the important realization that true happiness and freedom cannot be found in the world, for earthly joy is inextricably bound to sorrow, and worldly freedom to bondage.

Why then should Hindus practice Ahimsa? Most Hindu paths recommend vegetarianism, some schools make it a condition for followers after a certain stage. Why would it be wrong for a Hindu to kill or harm animals, whereas it is not wrong for animals to do so? The Nandinatha Sampradaya (which I follow)  makes this teaching clear:

Ahimsa, or noninjury, is the first and foremost ethical principle of every Hindu. It is gentleness and nonviolence, whether physical, mental or emotional. It is abstaining from causing hurt or harm to all beings. Aum.

I think the difference between us and the animals  is necessity. Animals need to kill others to eat, whereas we have a choice.  We don’t have to kill to live. We have been brought to a point where we can see the necessity for animals to live on others, but we have the option of stepping outside this and not causing harm. This stepping outside is a necessary part of spiritual advancement, bringing us closer to God.

Also, the way that meat is produced now is a far cry from living in nature. Animals are farmed often in cramped and cruel conditions, and fattened up to be slaughtered as soon as practical. This means that for people to eat meat in the modern world does a lot more harm that one animal killing another. In nature the animals live a full and free life up to the time they are killed.

I should point out that there are a few people who do live completely within the circle of life. There are Inuits, Native Americans, Aborigines, African bush-men, and more who don’t have the option of not eating meat, it is necessary for their survival. The animals that are killed do live a full life, for them there is no difference between being hunted by animals or by these people living in tune with nature. Most, maybe all of these people have respect for the animals they kill, praying for the souls of those they kill. In this way they avoid the harm associated with killing. I respect the path taken by these people too, though it is not the Hindu path.

So, as Hindus we should look at the circle of life as part of the savage beauty of nature. All is Shiva’s dance, and is as intended. We should step outside it though, and treat all life with reverence and harm none.

6 responses to “Nature red in tooth and claw”