Well, at least there are the railways… 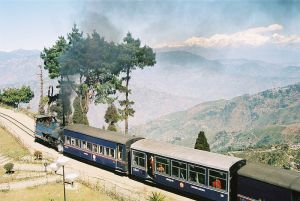 I can’t remember where I heard it, but I had read somewhere and believed that despite the obvious exploitation of India under the British Raj, there were two lasting positive legacies; the education system and the railways.

A couple of days ago someone on facebook someone mentioned Thomas Babington Macaulay as responsible for severely damaging the Indian education system. I had not heard of him, and I was told about an article in Hinduism today that described his attitudes towards Indian culture and the changes he implemented in India. This totally changed my opinion of the effect that the British Empire had on education in India.

Macaulay was a member of the Supreme Council of India. He was in charge of funding education in India. At the time higher level teaching in India was in Sanskrit or Arabic. Macaulay removed all funding for the teaching of these languages and switched higher education in India to English.

Macauley believed that European books and culture were superior to any Indian works. He said:

“I have no knowledge of either Sanskrit or Arabic. But I have read translations of the most celebrated Arabic and Sanskrit works. I have conversed both here and at home with men distinguished by their proficiency in the Eastern tongues. I have never found one among them who could deny that a single shelf of a good European library was worth the whole native literature of India and Arabia.”

This is remarkable in its arrogance, and also contradicts the opinion of many Western scholars who are perhaps better placed to judge Indian culture. There are many quotes at the remarkable website, A Tribute to Hinduism.  I will mention a few here as a contrast to Macaulay’s statement.

“In the morning I bathe my intellect in the stupendous and cosmogonal philosophy of the Bhagavat Geeta, since whose composition years of the gods have elapsed, and in comparison with which our modern world and its literature seem puny and trivial”
— Henry David Thoreau (1817-1862)  American Philosopher and Writer

“India is a highly civilized nation – a nation which developed a rich culture much earlier than any nation of Europe, and has never lost it.”
— Rev. Jabez T. Sunderland (1842-1936) American born, former President of the India Information Bureau of America.

“India is the source from which not only the rest of Asia but the whole Western World derived their knowledge and their religion… The literature of the Sanskrit literature incontestably belongs to a highly cultivated people, whom we may with great reason consider to have been the most informed of all the East. It is, at the same time, a scientific and poetic literature.“
— Arnold Hermann Ludwig Heeren (1760-1842), Egyptologist

Macaulay’s opinion on the literature of India was not by any means the limit of his prejudice. He said:

“The superiority of the Europeans becomes absolutely immeasurable. The question now before us is simply whether, when it is in our power to teach English, we shall teach languges in which, by universal confession, there are no books on any subject which deserve to be compared to our own; whether, when we can teach European science, we shall teach systems which, by universal confession, whenever they differ from those of Europe, differ for the worse; and whether, when we can patronize sound philosophy and true history, we shall countenance, at the public expense, medical doctrines which would disgrace an English stable hand, astronomy which would move laughter in girls at an English boarding school, and geography made up of seas of treacle and seas of butter.”

There is no doubt that the Western world had made many recent scientific and technical discoveries at that time. I suspect that Macaulay did not realise that much of the mathematics at the heart of the technological advances, including the decimal number system, originated in India. He almost certainly did not know that logic and syllogisms were formulated in India independently of Socrates, or that India was the first country to systematically investigate the science of phonetics.

It is clear that Macaulay’s opinion of Indian culture and knowledge was ignorant, but if his motivation was to improve and educate Indians perhaps we could still have some sympathy with his position. Unfortunately this is clearly not the case. Macaulay set out to educate a convenient class to sit between the British rulers and Indian population. He said:

“It is possible to make natives of this country thoroughly good English scholars, and that to this end our efforts ought to be directed. It is impossible for us, with our limited means, to attempt to educate the body of the people. We must at present do our best to form a class who may be interpreters between us and the millions whom we govern; a class of persons, Indian in blood and colour, but English in taste, in opinions, in morals, and in intellect.”

The legacy of this was a generation of Indians who were not proud of their own heritage. Of course things are never black and white, as there are certainly some advantages to India in having a large number of English speakers in today’s world. It is difficult to judge how large this advantage is.  China seems to manage rather well without a wide use of English inside China. Ironically the widespread knowledge of English is also something that has helped Westerners understand the rich Indian traditions and spiritual wisdom.

So much for education as a lasting positive legacy of the British Empire. Well, at least there are the railways…

10 responses to “Well, at least there are the railways…”