Last week we were visiting my father, who lives near London. To make the visit into a pilgrimage I wanted to visit a Hindu temple. When previously visiting my father we have gone to the extremely impressive Swaminarayan temple. This time I wanted to visit a Saivite temple, and because Lord Ganesha has special meaning to all of us, we visited the Shree Ghanapathy Temple in Wimbledon.

As on previous occasions when we have attended Hindu temples in the UK we were made to feel welcome. I think that any Westerner can be assured of a welcome in any Hindu temple in the West when just “turning up” for an Aarti service.

We attended the morning Aarti at 10 a.m. which is usually not the best attended daily service, though over a dozen worshippers attended. A woman guided my wife and daughters in what to do during the service, which differed from the one at our local mandir in several ways, for example in our mandir the aarti lamp is passed around the worshippers after the ceremony, whereas here it was placed in front of the deities and the worshippers came to the lamp for the blessing. The layout of the temple meant that we followed the priest as he performed Aarti for each deity in turn, where as in our local mandir all the deities are in a row and the worshippers remain in one place when the priest moves down the row. 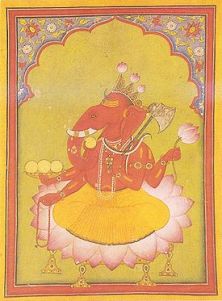 Spiritually, on entering the temple it took me a while to feel the Shakti, the holiness of the temple. This was due to me, not the temple, it took a while to settle down from the hastle of driving through the outskirts of London. We arrived a few minutes before the Aarti, and we viewed the deities, and I told my daughters about each one I knew of (I had to look up Shri Ayyappa and Shri Dattatreya later!). As people arrived for the Aarti we sat down and contemplated Ganesha, listening to the Ganesha mantra. By this time I could feel the spiritual power of the temple. During the aarti when the curtains in front of the main deity were opened I felt the blessings of Ganesha, which transformed a visit to my father and a holiday in London to a pilgrimage.

This entry was posted in hinduism, religion and tagged Ganapathi, ganesha, mandir, saiva. Bookmark the permalink.