My Meeting with Satguru Bodhinatha Veylanswami

Shiva as Dakshinamurthy, the Guru

In my previous post I wrote about my forthcoming meeting with the Satguru of the Nandinatha Sampradaya, Satguru Bodhinatha Veylanswami. At the time I did not know what to expect. As you can probably tell from my post I was prepared for the meeting be just talking to a wise and holy man. I was not sure that I would feel any connection with him as a Guru. My spiritual path has involved more searching than finding, and I did not want to build up hopes or expectations that might not be met. 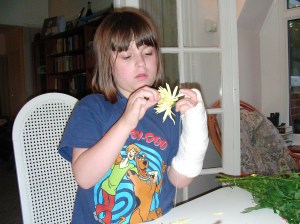 The meeting was in a hotel in London, which is over 200 miles from where I live. We had arranged to visit my father who lives just outside London, and travelled from his house by train. The evening before our meeting we made garlands of flowers as a gift for the guru.

My wife, younger daughter, and I arrived about half an hour early. This turned out to be very nice, because other devotees were present in the hotel lobby. I had never met any of them, but I had corresponded to some on an online group that is available for people studying the Himalayan Academy Master Course, a self-evaluation introduction to Hinduism and the Shaiva Siddhanta church. It was very nice meeting people in person and talking with them.

When it was time for me and my family to receive darshan  of the Satguru we went upstairs and were guided into the room. I asked if we could place the flower garlands on him and being given permission we did so. I was nervous and forgot the protocol, only remembering to prostrate to him. He did not mind my departure from protocol at all.

I asked him several questions, which he answered, and he asked me how I had found out about Shaiva Siddhanta and the Master course. What was said, however, was really not as important as the spiritual feeling. 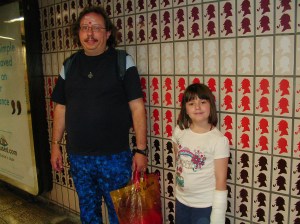 When you visit a mandir and sit in front of the deities you start to feel a sense of peace and calmness, which emanates from the deities. I cannot describe the feeling to someone who has not felt it, but in a way it is like a cool breeze coming from the deities – though it calms and cools you spiritually rather than physically. I was not fully aware of this when I first visited a mandir, it just felt like a peaceful and holy atmosphere, but it is something that I now can feel. Not everybody senses this in the same way, but this is the way I experience it.

When meeting Satguru Bodhinatha Veylanswami I could feel the same emanation of peace and calm from him that I feel in the temple. While his wise words spoke to my intellect his presence spoke to my spirit. This was a very important day for me.

3 responses to “My Meeting with Satguru Bodhinatha Veylanswami”