Review – Hindu Children in our Schools, Their Culture and Background 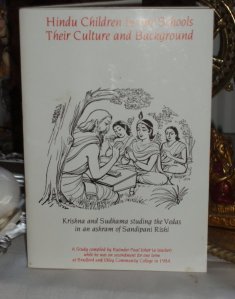 This ia a review of a booklet that I was fortunate enough to be given by its author, Mr Johar. It may seem silly to review a booklet that is not generally available, but I am following my feeling that it may be useful to someone. I have often found that things tend to come into people’s hands at a time they are needed, so I will follow my intuition and review this booklet.

The booklet of about 25 pages was written by Mr Johar Ji when he was a teacher on secondment to Bradford and Ilkley College (now incorporated into Bradford College), in 1984. It was intended to give teachers a background in Hinduism and the Hindu community so they would understand Hindu children in their classes. It does that and much more.I understand that this leaflet was widely distributed around the schools at the time. Though it hasn’t been printed recently I understand that Mr Johar Ji has a number of copies left.

The booklet gives a very succinct and insightful description of Hinduism, its practices and beliefs. It gives details of festivals, worship and even dress. It is a real achievement that the flavour of Hindu beliefs and philosophies can be gained in such a short volume. It is written in plain language, from the heart and shows an obvious love and understanding of Hinduism.

A lot of this information is as relevant today as it was when the book was written. Times have changed, however, and in many ways the booklet is an important part of the social history of the Hindu community in Britain, and of multiculturalism itself. Mr Johar Ji gives a justification for the (then recent) change of the Religious education syllabus to cover world religions rather than just Christianity. It is also interesting to see the hopes and wishes of the community, seeing Children growing up with anglicised outlooks, etc. The book contains a section on caste (varna), and why it has no future among Indians living in the UK. A lot of issues that present day British Indian descendants take for granted were fresh then, one thing I hadn’t thought of is that the weather in the UK has moved a lot of autumn celebrations that are held out of doors in India into temples.

The book is very readable and informative. The whole thing can be read in under an hour, reflecting its origin as a ‘background’ for busy teachers. For anyone wanting to understand Hinduism, Indian culture and the way it has adapted in the UK, I would highly recommend this book.