Shiva appears in many forms. The abstract form of the lingam (sanskrit for mark or sign) helps us concentrate on the mysterious nature of Shiva, that is beyond comprehension or representation.

The lingam reminds us of the presence of God within all of creation, and within us all.

the canonical form of Shiva, meditating with the moon in his hair, holding the trident and drum. This is often seen as the canonical image of Shiva the Mahadeva, the great God.‘

Another common representation of Shiva is the Nataraja, Shiva as the Lord of the dance. 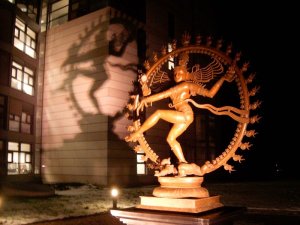 Here Shiva is seen dancing the eternal dance of creation and destruction. He dances on the demon dwarf, Apasmara, who represents ignorance.

These three representations of Shiva are probably the most common, but they are far from the only images.

Shiva also appears as Ardhanari, an androgynous composite of Shiva and Shakti together in one body.

This form reminds us that God is beyond gender, yet encompasses both genders.

Another composite form is Harihara, a combined form of Vishnu and Shiva. This reminds us that there is one God, with many aspects. When we sorship Shiva we are also worshiping Vishnu, Shakti and all possible manifestations .

The worshipers of Shiva should not see those who worship Vishnu as any less, neither should the followers of Vishnu look down on those who follow Shiva. All followers of Sanatana Dharma (Hinduism) are looking for the divine. When one fully realises the true nature of God and of ourselves we will realise that we have all been approaching the same mountain top from other directions.

This is expressed well in the Shiva Aarti.

Jai Shiv Onkara Har Shiv Onkara,
Brahma Vishnu Sadashiv Arddhagni Dhara.
Om hara hara Mahaadevaa…
Meaning: Glory to you, O Shiva! Glory to you, O Omkaara! May Brahma, Vishnu and the assembly of other gods, including the great Lord Shiva, relieve me of my afflictions!

Ekanan Chaturanan Panchanan Rajai,
Hansanan Garudasan Vrishvahan Sajai.
Om hara hara Mahaadevaa…
Meaning: Being the Absolute, True being, Consciousness and Bliss, you play the roles of all the three Gods – Brahma, Vishnu and Shiva. As Vishnu, you have but one face, as Brahma four and as Shiva five. They gladden the sight of all who behold them. As Brahma you prefer the back of the swan for your seat, as Vishnu you like to ensconce yourself on the back of Garuda (A large mythological eagle – like bird believed to be the vehicle of Lord Vishnu) and as Shiva you make the sacred bull your conveyance; all these stand ready. O Great Lord, pray rid me of my afflictions!

Do Bhuj Char Chaturbhuj Das Bhuj Te Sohai,
Tinon Roop Nirakhta Tribhuvan Jan Mohai.
Om hara hara Mahaadevaa…
Meaning: As Brahma, you possess two arms, as Vishnu four and as Shiva (Dashabaahu) ten, all of which look matchlessly lovely. No sooner do the inhabitants of the three spheres behold you than they are all enchanted. O great Lord Omkaara, pray rid me of my afflictions.

Akshaymala Vanmala Mundmala Dhari,
Chadan Mrigmad Sohai Bhale Shashi Dhari.
Om hara hara Mahaadevaa…
Meaning: You are, O great Lord Omkaara, wearing a garland of Rudraaksha, another of forest flowers the third of skulls; your forehead, glistening in the moonlight which it holds, is smeared with sandal-paste and musk. Pray rid me of my afflictions.

Shvetambar Pitambar Baghambar Ange,
Sankadik Brahmadik Bhootadik Sange.
Om hara hara Mahaadevaa…
Meaning: O great Lord Omkaara, your body is attired in white and yellow silken clothes and in tiger skin, while in your company are troops of goblins, gods like Brahma and divine seers like Sanaka. Pray rid me of my afflictions.

Kar Men Shreshth Kamandalu Chakra Trishooldharta,
Jagkarta Jagharta Jag Palankarta.
Om hara hara Mahaadevaa…
Meaning: O great Lord Omkaara, you hold akamandalu (the mendicants water-jar) in one of your hands and in another a trident; you bring joy to all, destroy all distress and sustain the whole world. May you rid me of all my afflictions! 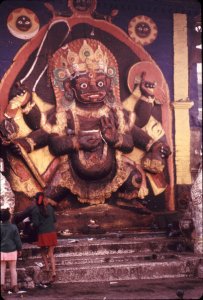 Another form of Shiva is Bhairava, the fierce form, the annihilator of evil. Bhairava relates to Shiva as Kali relates to Parvati. This is the form that Shiva takes when there are demons to destroy. As with Kali and Parvati, Bhairava should be seen as tough love. Sometimes we need hard lessons to further our spiritual advancement. Also, anhialation is necessary for creation, everything in conditioned reality needs to come to an end so that more can be created. Even the universe has cycles of destruction and creation.

This is the five faced or five headed form of Shiva. The image is from exotic India art, and is available from them as a painting on cotton. Each of the faces has a name and represents a specific aspect. These five faces are:- Isana Tatapurusha Aghora Vamadeva Sadyojata

Isana faces south-east and represents the Ishwara aspect of Shiva known as Sadashiva or the Eternal Shiva.

Tatpurusha faces the east and represents the deluded purusha or ego aspect of Shiva.

Aghora faces south and represents the destructive and regenerative aspect of Shiva, that like fire, first devours life and then prepares the ground for its renewal.

Vamadeva faces north and represents the healer and preserver aspect of Shiva.

Sadyojata faces west and represents the creative power of Shiva.

Some of the images are quite small in this article. Click on them to see a larger image.

This entry was posted in hinduism, religion and tagged god, harihara, hindu, one God, shiv, shiva, vishnu. Bookmark the permalink.

23 responses to “Lord Shiva, many forms”