The Father, the Son, and the Donkey 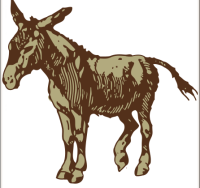 A young man, returning home from French school with many diplomas, thought he knew everything. His father said, “My son, come with me. I’ll teach you about life.”

So they bought a donkey and both got on to ride. As they approach a village, they saw a crowd gathering. “Those two heartless riders are going to crush that poor beast of burden.”

“Hear that, son?” asked the father. When they had left the village, he got off and pulled the donkey by the reins, with his son still on it.

At a second village, they heard murmurs. “What a rude little boy … why won’t he let his poor old father ride?” So the son climbed down and his father got on.

At a third village, a fat woman blocked their path, yelling, “Lazy old man! How dare you force a little boy to walk in the burning sun?” So the father got off, and he walked with his son alongside the donkey.

At the last village, they were met with whispers. “Are these two crazy or what? They’re walking alongside a perfectly strong animal!”

A little farther on, they stopped in the shade of a big tree. The father says, “Well, my son, have you been paying attention? People will always have something to say about what we do. But do what you must. That’s life.” From that day on, the son understood that he had a lot to learn.

Taken from Palette Website, appears to be public domain.

This entry was posted in stories. Bookmark the permalink.

5 responses to “The Father, the Son, and the Donkey”